Hi everyone, welcome to my blog this week.  Lots and lots of product on this page.  I wanted to get more of our Australia trip scrapbooked, (I am so far behind).  I have had a Dusty Attic chipboard piece for a while, and I wanted to get it used.  It was a 30x30 piece, that I carefully cut up, and turned into a double page layout. See below for the double page look.   I used Graphic 45 paper, with the cobwebs on the back.
Layout One: 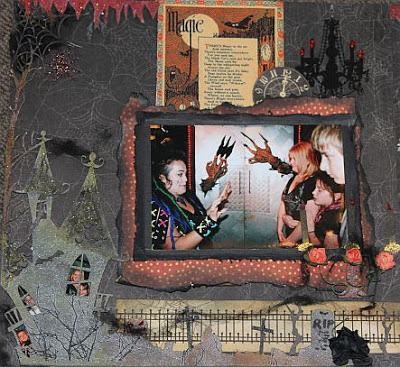 For this part, I painted the chipboard house using distress stains, and then I added graphite glimmer mist, which is a black.  Then I inked the edges of the chipboard, and on the house I added some green ink as well. I then put some of the smaller photos inside the haunted house windows.  I added some Kaisercraft rubons to the house and a bat.  I added a spider into the spiderweb at the top left of the picture, that came with the cobwebs. 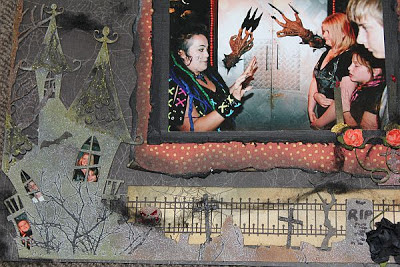 Along the bottom I used black flowers to hide where I cut the chipboard, and also some cobwebs that I purchased from the $2.00 shops.  I mounted the photo on black card stock and distressed and then inked the edges, and then mounted on Graphic 45 spots paper (Christmas range) and then distressed and inked that really darkly.  I put RIP on the gravestone.I added the graphic 45 fence in as well, as it was a bit dark. 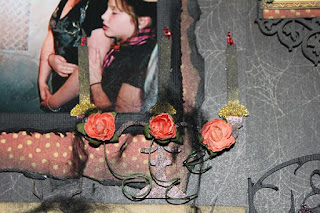 I added some Kindy red glitz on the candles and gold on the base of them, then wound some orange flowers amongst it, and the cobweb. 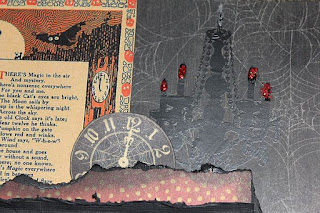 The top of the picture was a picture I found on the Internet, and a clock I cut from Graphic 45 paper, and a rubon chandelier that I have used heaps from Hambly prints. 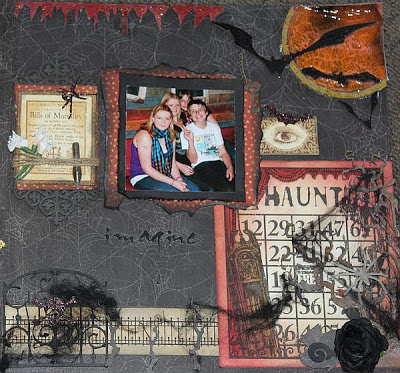 For this part, I cut a gate from my cricket machine, using iron works cartridge.  I then used a Tattered angels haunted card, that I coloured with distress pens, and then inked around with a dauber. 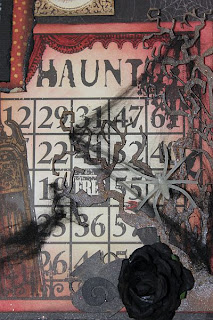 The tree was from the original overlay that I cut up.  I added more cobwebs and spiders and a black rose, a tipped over urn.  The bills of mortality was put on chipboard, like a picture, with string and flowers and pen nib added. 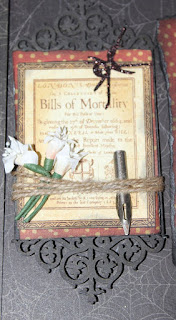 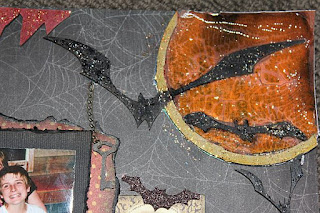 Lastly I worked on the moon.  I knew what I wanted but it took a few goes to get this look.  Glitter paint, was not a good look.  I had to carefully get it all out, so in the end I used a crackle medium to get it really cracked. The black bats were Distress stain, and Kindy Glitz.
The final double page layout was so dark and awesome, I was really pleased with it all. 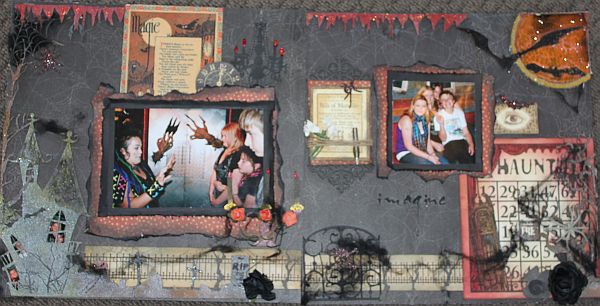