Hi everyone, where has this week gone? Today we will be finishing off my Christmas Canvas. 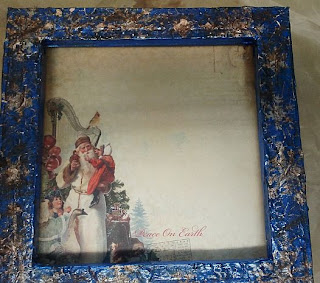 The next stage is to add your paper to the inside of the canvas. The hardest part, is that while it is a 30x30 canvas that I have used, and the paper is 30x30cm, it will not fit inside the space available, so you need to trim it down until it is just wider than the space.  I have used Kaisercraft Turtle Dove Calling Birds page.  I was careful to make sure Santa was intact, but cut off the angel on the right hand side, because I wanted to use that later.  Because I had two sheets of this, I cut out a 2nd Santa and children, and inked around the edge with a brown distress ink.  Then I added foam dots on the back, and then layered it on top of the other image, to give dimension to the page.  As with the photo below, if the piece is two big, it will sag, and I find it best to add some cardboard to brace it through the middle, but I still use the foam around the edge. 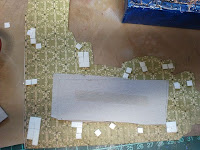 Time to really play! I started with some Twiddleybitz chipboard,  and I sprayed it with Glimmer mist, and then painted glimmer glam over parts of it.  When spraying with any sprays keep some gauze beside you, and wipe up the excess with it, then you have coloured ribbon to use later. 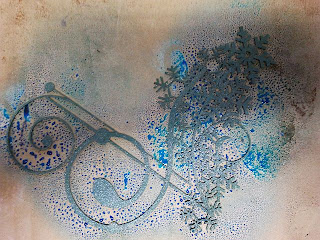 I also sprayed some white roses 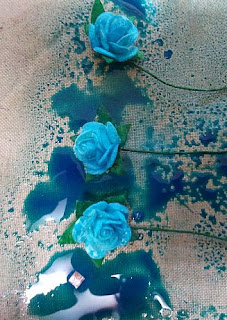 then i cleaned it up, with the gauze. 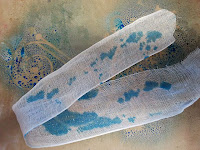 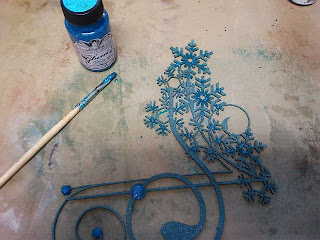 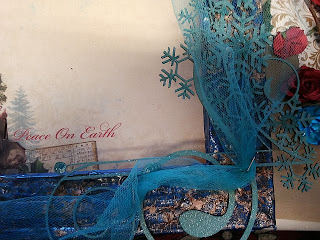 Then I painted some parts with glimmer glam, to give a sparkle, and glued it to the right hand side of the canvas. If you have some tulle on hand, then why not staple it on top? Then I decorated and added few other Twiddleybitz chipboard pieces. 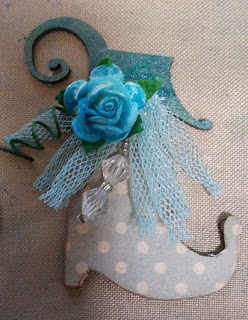 I painted the top again with glimmer glam, and covered the bottom with left over paper (make sure you sand and ink the edges)and then add a little piece of gauze that has been cut up. Then I added the blue rose - after curling the stem. Wrap the stem around a pencil or something small, and then pull it off (Smooch bottles work well). 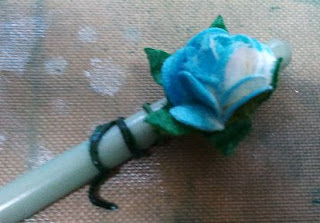 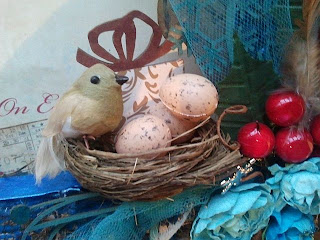 Next I used one of the new Kaisercraft bird nests which I stapled on to the shelf in the canvas, and then glued some eggs in.  I had this little bird (I keep a stash of them) they have little metal pieces, which I pushed into the nest.  I put a little present behind the bird into the nest, from the Twiddleybitz set, which I painted and covered with paper.   I added Kaiser craft holly sprig, and then some large Kaisercraft blue flowers and a little snowflake metal brad.  I decided a few feathers would add a soft touch. 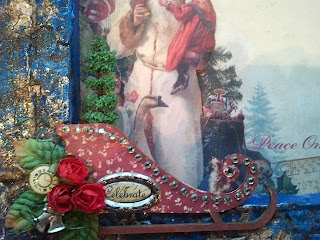 Then I decorated a little Twiddleybitz sleigh with paper, and distress stain, and some bling, some red roses, small leaves, and a little clock button, and a small metal bells that I had. 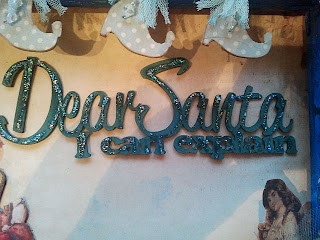 Finally I added the angel that I had cut out earlier and I fitted it in behind the birds nests, and then I added another Twiddleybitz Dear Santa chipboard that  I painted with glimmer glam, and then added Kindy Glitz crystalina. Leave to dry! 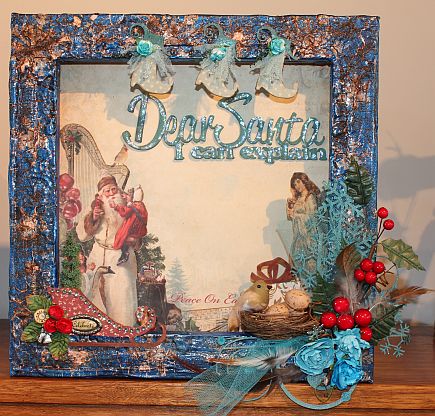 I hope you've enjoyed this tutorial and are now keen to try one of your own!
Posted by Imagine If... at 7:51 PM