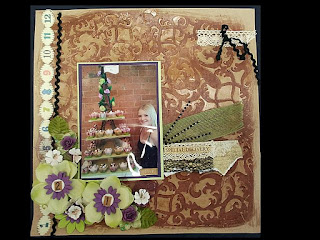 This is a page where i used a basic piece of kraft cardstock.  I used a tattered angels stencil, and modelling paste.  I added the modeling paste to the stencil, filling the holes, and then wiping away the excess.  I let it dry overnight, and then sprayed with coffee shop glimmer mist.  I was trying to replicate the brickwall that is in
the photo. From there is was a matter of mounting the photo on two pieces of cardstock, black and lime green.  I added a strip of paper and sacking ribbon.  Added some bling and then some lace.  On the right handside I added a strip of stickers, some more black ribbon.  Then I added flowers that were off Aly's Eiffle tower cupcake stand, and then added paper flowers in purple to bult them out.  I added a few other flowers, that I added wire stamens to, and also some flower soft int he middle of them.  Some leaves for texture, some small purple green tara roses, and then I added two large brads in the middle of the flowers and stuck 21 on them.
Posted by Imagine If... at 2:48 PM No comments: